Not to mention our good manners, friendly faces and helpful people.

At the Port of Mobile, our goal is to be a strong link and partner in your supply chain. With 18 diverse cargo handling facilities, the capabilities and reliability of the Port of Mobile is unmatched. Situated perfectly on the Gulf of Mexico with access to 45-foot-deep water, nine railroads, and additional connectivity with air, truck and barge, the port delivers your goods. The port has invested over $1.4 billion in the last 20 years to modernize and grow its facilities to support your needs.

Alabama’s only seaport and its role in global trade can be traced back to the early explorers who sought the region’s natural resources for the crowns of Europe. That trade persisted through colonization and ultimately helped build the commerce of the United States. In 1922, the Alabama state legislature authorized the construction of the Alabama state docks on 500 acres north of Mobile’s waterfront. The docks were opened officially in 1928 and served to increase the region’s commercial shipping capacity. During World War II, wartime created unparalleled growth for United States ports, and the Port of Mobile was no exception. Workers from throughout the state sought out employment through the port, with the total number of people employed during the war rising to nearly 90,000. The 21th century delivered regional investments in manufacturing, agribusiness and mining, and Alabama’s public seaport terminals at Mobile serviced that growth while rising to be one of the most prominent seaports in the United States.

History of the Port

The port announced the CG Railway rail ferry service between Mobile and Mexico. 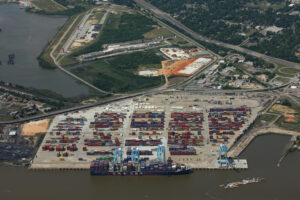 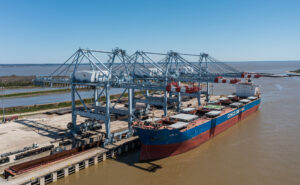 Port opens Arlington Park and conveys the public waterfront asset to the City of Mobile.

Officials christen the port’s new post-Panamax turning basin at the Port of Mobile.

Port announced $360 million in capital investment over the next five years to improve infrastructure through land acquisition, new rail and intermodal and cargo.

A new $36 million steel coil handling facility opened at the Port of Mobile in a joint venture with Alabama Steel Terminals, LLC. 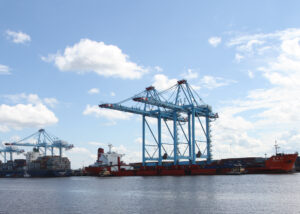 Port entered into agreement with the U.S. Army Corps of Engineers to construct a new turning basin and to deepen and widen the Mobile ship channel to service super post-Panamax ships. 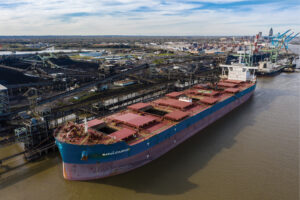 Port of Mobile welcomed the MARAN COURAGE, the largest bulk carrier ever to transit the port.

Construction begins to deepen and widen the Port of Mobile’s harbor and channel to -50 feet by Q1 2025.

The Alabama Port Authority is pleased to schedule a port tour for business and community groups. The duration of a scheduled tour is approximately 1-1.5 hours. The Port Authority has a transport for scheduled groups of 10 or less. Groups larger than 10 should arrange for a single transport at their expense. The Alabama Port Authority solely reserves the right to decline any tour request for safety or security reasons. Interested parties are asked to fill out the form below, and a Port representative will be in touch. Thank you.